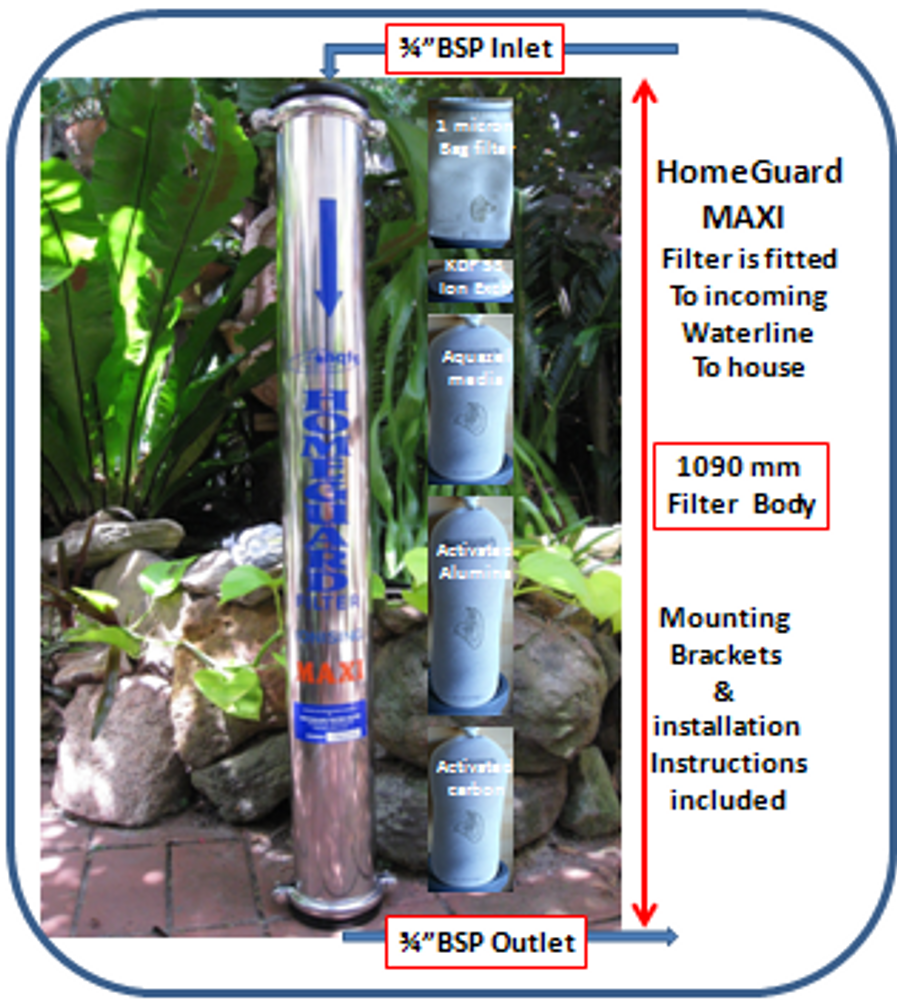 NOW THERE IS A PROVEN & INEXPENSIVE WAY TO HAVE CLEAN, SAFE WATER FROM EVERY TAP & SHOWER  IN YOUR HOUSE WITH JUST ONE
HOMEGUARD WHOLE OF HOUSE WATER FILTER!

GAPS Australia are confident in working with an Australian Water Filter company who are aware of the need to remove toxic metals and fluoride from our drinking and bathing sources. GAPS Australia are not comfortable with drinking recycled water and the government decision to pollute our water further with fluoride.

When you install a HomeGuard Water Filter for your baby or children, you will no longer be at risk wearing clothes that have been washed in possibly contaminated water next to sensitive skin all day.

AND OF COURSE YOU WILL BE ABLE TO ACTUALLY DRINK FILTERED WATER THAT WILL TASTE GOOD FROM EVERY TAP IN YOUR HOUSE! 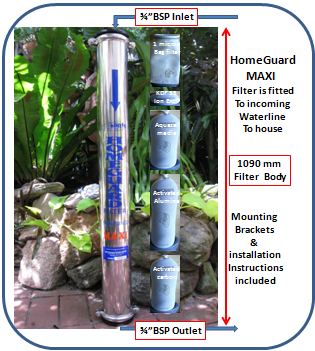 This system can be installed without a plumber if you are confident in following the instructions that come with the system.  This system is installed outside the house and can be relocated and used at another dwelling.

There is also a group of contaminants, which includes microscopic worms, parasites and protozoa.  The biggest offenders are Giardia Lambda and Cryptosporidium, which cause major diarrhea, dehydration, intestinal disorders and even death.  Water experts estimate that over 63% of water problems are directly caused by Giardia and Cryptosporidium.
Giardia is seven to fourteen microns in size and Cryptosporidium is from three to five microns in size.  When the environment becomes inhospitable (like in the presence of chlorine), both parasites can go into the cystic form (like a hard, round, impermeable microscopic egg).  The cyst form is resistant to chlorine and very hard to kill.  Municipal water authorities are unable to remove the cysts economically.  Healthy individuals infected by these parasites experience cholera like illness: watery diarrhoea, headache, abdominal cramps, nausea, vomiting and low-grade fever.  For the immuno-compromised, however, the results of the infection are much more severe; the parasite can severely damage the liver and respiratory tract, as well as the gall bladder and pancreas.  Even worse, there is a 40% to 50% mortality rate for the immuno-compromised.  Those at risk include cancer patients undergoing chemotherapy, infants, the elderly, kidney dialysis patients, recent transplant patients, aids patients and others with suppressed immune systems.
The only sure way of removing these cysts and other protozoa and fine particulate material is to run the water through a membrane with a mesh size of less than 3 microns.

The HomeGuard water filter is fitted with a KDF Ion Exchange element.

What are KDF Process Media and how do they work?
KDF Process Media are high-purity, granulated copper and zinc-based alloys that treat water through a process based upon the principle of redox (Oxidation-Reduction). Originally, KDF was shorthand for Kinetic Degradation Fluxion.

We can explain redox like this: KDF Fluid Treatment's unique combination of copper and zinc creates an electro-chemical reaction. During this reaction, electrons are transferred between molecules, and new elements are created. Some harmful contaminants are changed into harmless components. Free chlorine, for instance, is changed into benign, water-soluble chloride. Similarly, some heavy metals such as copper, lead, mercury and others, react to plate out onto the medium's surface, thus being effectively removed from the water supply.
Why use KDF Process Media?
So…why consider using KDF Process Media? We can give you two good reasons.  One: Because KDF Process Media enhances the performance, extends the life, reduces the maintenance and lowers the total cost of many available carbon-based systems. Two: KDF Process Media help control microorganisms by creating an environment that's deadly to some microorganisms and that interferes with the ability of many other microorganisms to function. Either way, the use of KDF Process Media results in the total elimination of some contaminants and a great reduction of a wide variety of others.
The Blackstone HomeGuard water filter is fitted with a large KDF 55 Ionising Element to perform this very important water treatment

5.    How does it work
Carbon is manufactured by the controlled burning of Cellulose. The temperature of the burn and the amount of oxygen entering the process control the hardness, filtering power and grain size of the carbon.
Carbon filters through both its grain size and by its ability to bind up organic and inorganic materials to itself through an electrical charge on its surface. This is known as Adsorption.
Carbon filtration is used successfully in industry for filtering wastewater, for the removal of fine insolubles from water and to remove metals and chlorine compounds from domestic water. Carbon filtration is also used to control biological contamination in water.
Activated Coal carbon has a different internal structure than coconut carbon and is used in particular applications allowing for more uptakes of certain contaminants.
What is activated carbon made from?
Activated carbon can be manufactured from any organic material containing carbon. Commercial carbons are made from sawdust, wood, charcoal, peat, lignite, petroleum coke, bituminous coal, and coconut shells. We choose these raw materials in order to provide the best activated carbon to our customers.

How is activated carbon produced?
For example when using coal, the coal is pulverized to a very fine particle, about the size of talcum powder. The powdered coal is mixed with a binder to "glue" it back together and pressed into briquettes. These in turn are crushed and classified to the size of the desired end product. This process, called reagglomeration, creates an activated carbon that is harder and less dusty than a direct activation process. Reagglomeration also assures that the activation occurs through the granule to the core. Some direct activation processes only activate the exterior of the granule.

Having all of the carbon activated uniformly is essential to provide active adhesion filtration.

The sized material is heated in an oxygen void environment to avoid burning and to remove the volatile components of the coal. The carbon is activated by additional heating in a controlled environment of oxygen and steam. The activation process creates a highly porous graphitic plate structure with tremendous surface area.

How much void space is in carbon?
A container of carbon is roughly 20% carbon, 40% interstitial space (the volume between the carbon granules), and 40% pore volume (the volume inside the carbon granules). Another way to visualize this is: If you had a 55 gallon drum full of dry carbon, you could add 44 gallons of water to the drum before it would overflow. Therefore, 80 percent of the drum volume is air.

This item has a fixed shipping price applied as well as a handling fee for $1.30

How much (%) of the chlorine does the system eliminate?

Under correct flow rate we can remove 99.9%

How much (%) of the fluoride does the system eliminate?

It mentions on the website that the system should be able to be installed by ourselves however my Dad had a bit of a look at it and said it would be difficult. Is it really self install? If not, do you know the approx cost for a plumber to do it?

Unfortunately plumbers charge like brain surgeons so always get a quote

Does the system 'demineralise' the water or does it just take out the contaminants?

No MAXI is designed to take out harmful contaminants and leave trace levels of minerals, “Pure” some completely pure water can do more harm than good