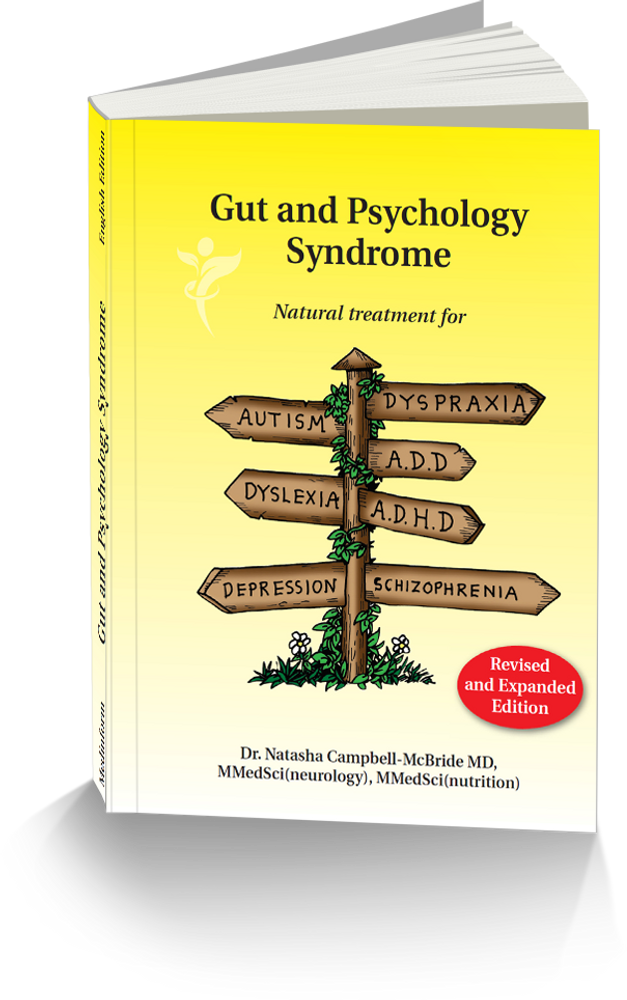 This book is printed here in Australia by GAPS Diet Australia Pty Ltd.  Please contact us HERE if you are a business wishing to set up a wholesale account.

Gut and Psychology Syndrome (GAP Syndrome or GAPS) is a condition which establishes a connection between the functions of the digestive system and the brain. This term was created by Dr Natasha Campbell–McBride, MD, MMedSci (neurology), MMedSci (human nutrition) in 2004 after working with hundreds of children and adults with neurological and psychiatric conditions, such as autistic spectrum disorders, attention deficit hyperactivity disorder (ADHD⁄ADD), schizophrenia, dyslexia, dyspraxia, depression, obsessive –compulsive disorder, bi-polar disorder and other neuro-psychological and psychiatric problems.

Who is Dr Natasha

She graduated as a medical doctor in Russia. After practising for five years as a Neurologist and three years as a Neurosurgeon she started a family and moved to the UK, where she got her second postgraduate degree in Human Nutrition.

She is well known for developing a concept of GAPS (Gut And Psychology Syndrome), which she described in her book Gut And Psychology Syndrome - Natural Treatment for Autism, ADHD, Dyslexia, Dyspraxia, Depression and Schizophrenia, now in its second edition. Thousands of people around the world follow the highly successful GAPS Nutritional Protocol to help themselves and their families.

In her clinic Dr Campbell-McBride works as a nutritional consultant with many patients with heart disease, high blood pressure, arrhythmia, stroke and other complications of atherosclerosis. She has become acutely aware of the existing confusion about nutrition and these conditions, which spurred an intensive study into this subject. The result of this study was her book Put Your Heart In Your Mouth! - What Really Is Heart Disease And What We Can Do To Prevent And Even Reverse It.

Dr Campbell-McBride is a keynote speaker at many professional conferences and seminars around the world. She frequently gives talks and traiing to health practitioners, patient groups and associations. She is a Member of The Society of Authors and a regular contributing health editor to a number of magazines and newsletters.

Really Impressed with the level of detailed Information in it. It makes understanding the issues at hand a whole lot easier . The recipes are really varied and tastes great . I can now see a light at the end of tunnel. Can&#039;t wait!