This oyster supplement can help increase energy levels, offset the symptoms of fatigue, boost the immune system, and improve sexual health. Recommended by Dr Natasha Campbell-McBride, OysterMax in it's simplest form is basically high quality fresh oyster meat dried and powdered (the shells are removed). Every batch is tested for toxic metals and other contamination. The oysters are grown on the West coast of Ireland in the open Atlantic waters. We believe this is the best form of zinc for our GAPS patients. There are no other ingredients in this supplement and it provides zinc in a natural form with all other components a zinc-rich natural food has.

The oysters in OysterMax® are specifically targeted for harvesting to provide the maximum amount of trace elements available. Oysters are the highest natural source of zinc, 10 times higher in fact than the next source, which is red meat. However, it also has important zinc co-factors such as manganese, copper and selenium. Taking synthetic zinc on it’s own can be dangerous as too much is as bad as too little and other elements like copper can become depleted if zinc is taken on it’s own.

The trace elements in OysterMax® are balanced with each other as nature intended, because they come from an animal source, not from a chemical factory. Together these elements along with many of the other micronutrients in OysterMax® provide the building blocks for over 300 enzymes in the body. These are involved in reactions that control everything from the way we look and feel to strong immunity and healthy libido.

OysterMax® oyster supplement is a high potency shellfish extract powder. Each 43g bottle of capsules contains the concentrated extract of 6 kg of shellfish.

OysterMax® has been proven beneficial in the treatment of many conditions. This high potency extract can help increase energy levels and offset the symptoms of fatigue. OysterMax® also boosts the immune system and helps maintain collagen and keratin production for faster wound and injury healing and healthier skin, hair and nails.

Bottle contains 120 Capsules, which is a normal 1 month supply.

WHAT ARE THE BENEFITS?

Clinical trials on human volunteers have shown that the bioactive compounds in OysterMax® have a direct effect on the anti-oxidant capacity of blood serum. This effect was seen very quickly. Free radicals in the blood were reduced by 90% within 8 days of starting the treatment. This effect was due partly to the direct anti-oxidant effect of certain bio actives in OysterMax® and also in part due to the discovery that the product increased the production of Glutathione in the body. Glutathione is a major anti oxidant in the body and it protects all cells from oxidative damage.

Oxidative damage, especially in the mitochondria of the cells, causes the cells to produce less energy. As a result all chemical reactions in the body suffer from reduced efficiency. Symptoms include fatigue, compromised immunity, premature aging and reduced libido.

The free amino acids in OysterMax® have been clinically proven to protect the body from oxidative damage. Endurance athletes, stressed out professionals, individuals exposed to environmental stresses such as UV light, smoking, excess alcohol consumption, all suffer from higher than normal levels of oxidative stress/free radical build up. The fatigue and tiredness associated with this oxidative stress has been shown to be reduced by taking OysterMax®.

The trace elements in OysterMax® are known to control over 300 enzyme reactions in the body. Many of these regulate processes, which govern the way energy is created and utilised by the body. For example, OysterMax® contains the building blocks for some of the enzymes, which regulate insulin production, which in turn controls blood sugar levels. Fatigue can also occur in cases of heavy metal toxicity. OysterMax® contains selenium, which has an antagonistic relationship with mercury and can therefore help detoxify the body. Oyster extract has been used traditionally for centuries for liver cleansing and the trace elements in OysterMax® have been shown to be beneficial in aiding the release of energy from the liver.

OysterMax® can help boost the immune response in a number of ways. The high organic zinc content can stimulate the thymus gland to produce thymulin. Thymulin regulates T-cells and T4 Helper cells which are key to the body’s immune defence system. However, cutting edge research from the US has recently shown that too much or too little zinc can knock the immune system out of balance.

OysterMax® contains 4.0 mg of zinc per 4 capsules, a safe amount of natural organic zinc to supplement your diet. The anti-oxidant  effects of OysterMax® are also beneficial during times of ill health as the body undergoes massive oxidative stress in certain situations. People undergoing chemo and radio therapies are particularly prone to oxidative stress and impaired immunity. OysterMax® has been used successfully for more than a decade in France as an adjuvant to the side effects of such therapies.

Pregnancy dramatically increases nutritional demands for expectant mothers. RDA’s for many nutrients increase during this time and also during lactation. For example, the RDA for zinc increases from 8mg daily to 12 mg daily during pregnancy and lactation. Zinc deficiency during pregnancy has been linked to low birth weight and premature delivery.  OysterMax® is the perfect supplement to help meet those increased nutritional demands as it contains all the constituents necessary for healthy growth.

OysterMax® can help the skin maintain collagen and keratin production. It can promote tissue repair, has an anti-inflammatory effect and contains the building blocks for the enzymes which destroy damaged cells before they have a chance to become cancerous. Weak, brittle nails, dull hair, spilt ends, and many skin conditions like acne, eczema and psoriasis can be ameliorated by using  OysterMax®.

OysterMax® contains  high levels of free amino acids.  Free amino acids are very useful as they do not need to be digested and they enter the blood stream directly and go to where the body needs them most. Three of these, glutamic acid, glycine and cysteine are the building blocks for collagen. Free cysteine is normally toxic to the body and having a non-toxic source of bio-available cysteine is very advantageous for collagen production in the body. The rest of the free amino acids in  OysterMax® are involved in the manufacture of enzymes, antioxidants and structural proteins such as keratin.

OysterMax® oyster supplement contains all of the building blocks for the body’s antioxidant defences. Free radical damage is one of the major causes of premature ageing in tissues, especially the skin. Free radical damage in the cells also reduces the cells ability to produce energy and leads to overall loss of vitality and endurance. Clinical work on OysterMax® showed that after 8 days, oxidative stress in the blood was reduced by 90%. This proved that OysterMax® has great potential to help reduce the causes of premature aging.

Trace elements in OysterMax® are known to increase free testosterone in the blood, which promotes increased libido in both sexes. For men the high organic zinc content in OysterMax® can increase sperm production and maintain good prostate health. Sperm contain 700 times more zinc than is found in blood plasma and the prostate contains more zinc than any other organ in the body. Low zinc levels can result in prostate swelling, low sperm counts and loss of libido.

Research carried out in 2006 by Japanese researchers showed that components found in OysterMax® improved lipid metabolism and suppressed increases in blood pressure. As such it has been shown to be a physiologically functional food capable of improving cardiovascular health.

OysterMax® is a natural shellfish extract. All of the nutrients are organic in origin making them 100% bio-available. The trace elements in OysterMax® are bound to transport molecules (peptides, amino acids) which makes them considerably more bio-available. The high concentration of free amino acids and peptides are also directly available to the blood once consumed making them very fast acting. Synthetic mineral supplements on the other hand need to bind to transport molecules during digestion before then can be absorbed, which may affect their bioavailability. All of the trace elements in OysterMax® are present in significant yet balanced concentrations, ensuring they all work in harmony as nature intended. None of the nutrients in OysterMax® are present in concentrations that could upset your bodies natural mineral and nutrient balance.

Further research is currently being carried out by our company on OysterMax® both in Ireland in 2 Universities, and by the Cellular and Microbiological Unit of the French Army to see what other bioactive properties OysterMax® contains. The French investigation is being carried out as troops operating in hostile situations undergo massive oxidative stress on the body, and they want to see how OysterMax® can help alleviate some of the fatigue and illness associated with this. We are very proud of our on going research and we will keep our customers updated on new findings as they occur via our e-newsletter.

For best results we recommend you take 4 capsules each morning before food with a glass of water. Not a substitue for a balanced diet. Keep out of reach of children. Not irradiated. 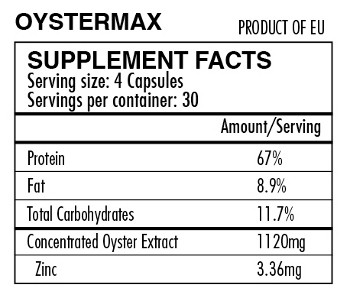 5 based on 2 reviews. Leave a Review.

Have switched to this brand of oyster caps as they come in the larger 120 quantity (family of 4 taking). They seem to be great quality. Easy to take. Check out easy and postage was fast. Happy to see that we are now able to purchase more than 1 in a single transaction. Saves a little on postage.

These capsules are fantastic. Noticed improvements straight away, however I suggest start at 1 capsule and increase overtime as I took the recommended dose and suffered severe detox (dizziness and headspins which lasted 2 weeks) as zinc can cause copper to dump into the blood stream.